This post is part of a series that introduces WebAssembly with and Blazor, a web framework to build single page applications using C#, Razor and ASP.NET Core. If you would like to see the previous posts, please follow the below links. You can also follow the GitHub repository created for this series here.

Part I - WebAssembly with C# – Introduction to Blazor

In this post let’s begin by looking at the project we created and we’ll look more closely to the Counter component (Pages/Counter.cshtml) to better understand the Blazor components features and how to build, use and share them not only on a single project but across multiple projects.

The first line contains a @page directive. This is used to define the routing of the component. After compilation the generated classes are decorated with a RouteAttribute with the specified template and the runtime looks for those attributes when deciding which components should be rendered.

Multiple route templates can be defined, so it would be possible to add another page directive such as @page “/anothercounter”. From that point on the component would respond for requests either for /counter and /anothercounter. Please check this commit to see how you could define the new route template and use it on the navigation menu of the application.

Its also possible to pass arguments so we could define a @page “/counter/” and use that argument to set, for example, the initial value of the counter. Optional arguments are not allowed so multiple routes must be defined.

The middle part of the component should be very familiar to anyone that has come across with the Razor syntax in the past. If you’re not familiar with Razor I recommend you to give a read of the syntax reference that you can find on this link before continuing to read this and the following posts.

The last part of the Counter component is the @functions block, where all the members (methods, properties, etc.) of the component call are defined so that they can be used for component logic and event handling.

In this component we have a field currentCount that is used to maintain state and a method IncrementCount that is used when handling the onclick event of the button defined in the DOM. This way when the user clicks the button the IncrementCount method is called, the component regenerates its render tree and Blazor applies any modifications to the DOM by comparing the new tree with the previous one, which makes the displayed count to be updated.

On the parent component markup we could also pass parameters to a child component or provide some content that should be rendered by it by placing it inside the child component tags, for example:

For this to work some changes need to be made to the Counter component, obviously.

All of these changes can be seen on this commit.

Restart the application and you’ll notice the new Title and Child Content being rendered on the Counter component inside the Index component. If you click on the Counter link of the navigation menu, you’ll also see the default title value being applied.

To better understand everything that was said above lets look at the generated DLL after compilation with Visual Studio. The generated code can be seen in the below picture: 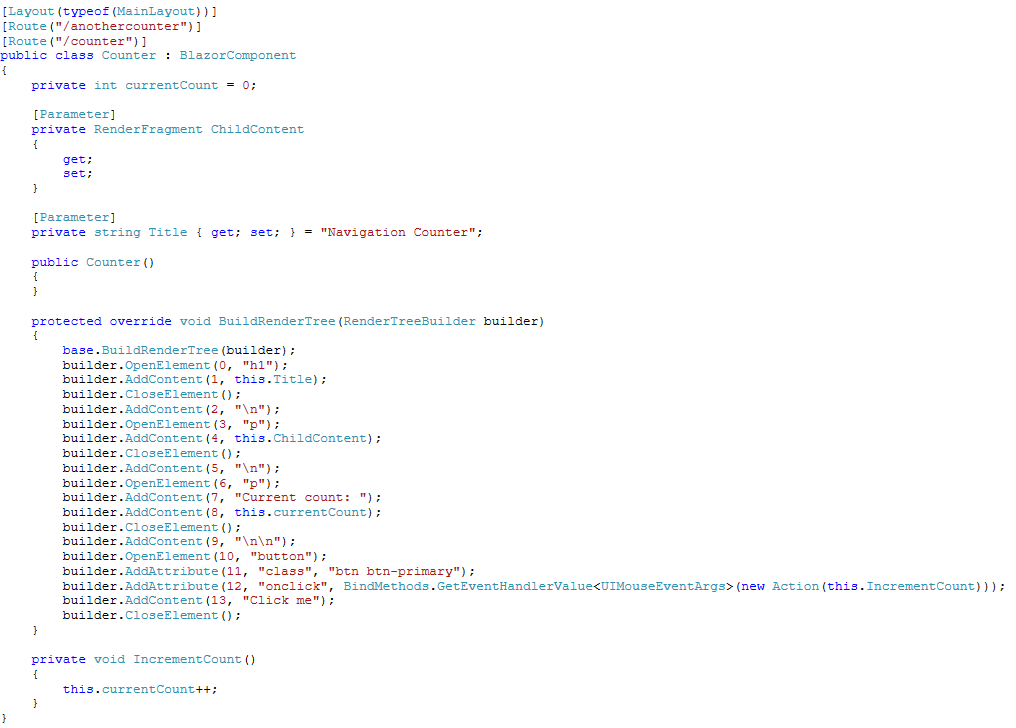 Please note some of the things we already discussed above and see how exactly the Razor markup that is defined in the .cshtml is taken and converted into the implementation of the overriden BuildRenderTree method.

As previously stated Blazor components can be shared across multiple projects. For that we need to create a Blazor library and add a reference to it in our current solution. Executing the following commands in our solution folder will do exactly that.

Reloading the solution in Visual Studio will show the new project. The Blazor Library template already comes with a default component and we'll now add it to our Index component so it can be rendered in the main page.

There are a couple of things that I would like to clarify at this point: The reason we add the above directive to the ViewImports file is so that the component can be used in all pages that have this file as their base layout, which is something that is happening in all the components of our application. If we are sure we just need to use it in a single component, we could add the directive in the corresponding file instead; As you can notice the @addTagHelper directive format is <namespace>.<component name>, <assembly name>. However, if the assembly has multiple components and we would like to include all of them, then the wildcard could be used instead, such as <namespace>.<component name>, <assembly name>. Finally, similar to what we did with the Counter component, we can now add the tag <Component1 /> to the Index component so that it will be rendered on the main page. We can verify this by running the application after all changes are made. All these steps can be seen on this commit.

Wrapping up for today

As you can see creating, reusing and sharing Blazor components is very easy and the programming models are very similar to everyone that is familiar with modern .NET web application development.

There is a lot more that can be said about Blazor components and we'll surely discuss that in the next posts.